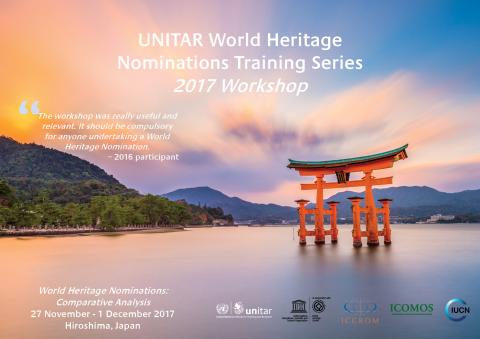 Type
Workshop
Location
Hiroshima, Japan
Date
27 Nov 2017 - 1 Dec 2017
Duration
5 Days
Programme Area
Other
Website
http://www.unitar.org/world-heritage
Price
$1,500.00
The fee covers tuition, study tours and materials.
Participants or their organizations are required to cover travel to and from Hiroshima, accommodation and meals.
Event Focal Point Email
nigel.gan@unitar.org
Contact Number
+81-82-511-2424
Partnership
UNESCO World Heritage Centre
ICCROM
ICOMOS
IUCN
Registration
Public – by registration
Mode of Delivery
Face-to-Face
Language(s)
English
Data Protection and Privacy
The personal data of participants applying for, registering for or participating in UNITAR's training courses and other events is governed by the Data Protection and Privacy Policy. By applying for, registering for or participating in this event, the participant acknowledges that he or she is, (or they are) aware of the policy and agree to its terms.
Background

The Call for Registration Document for the 2017 Workshop can be accessed here.

The UNITAR Hiroshima Office began implementing training focusing on World Heritage management and conservation practices in 2001, and works closely with the UNESCO World Heritage Centre and the Advisory Bodies. In 2011, after an in-depth needs assessment with selected State Parties and World Heritage professionals, the programme transitioned to examine the skills and knowledge required for developing more effective nomination dossiers in an effort to contribute to a smoother overall inscription process.

The development of good quality World Heritage tentative lists and nomination dossiers is an important process that requires a detailed understanding of a range of complex requirements. The creation of a dossier serves as a tool to collect information; to bring stakeholders together; and also acts as a basis for the efficient and sustainable protection, conservation, management and presentation of the nominated properties. The nomination dossier is essential to the inscription process as it is the primary basis on which the World Heritage Committee considers the possible inscription of a property on the World Heritage List. It also supports a credible World Heritage List of well-managed properties of Outstanding Universal Value.

Providing guidance to State Parties in the preparation of nomination dossiers and tentative lists remains an important goal and concern for World Heritage-related bodies. The importance of providing targeted training is highlighted in the 2011 World Heritage Capacity Building Strategy (WHC-11/35.COM/9B), which outlines the specific action that – “Training courses are developed and implemented to aid State Parties in the preparation of good quality nominations dossiers.”

Problems with nomination quality, including inappropriate and inadequate dossiers, have been identified at the completeness check, conducted by the World Heritage Centre when a dossier is submitted, as well as during evaluation by the Advisory Bodies and World Heritage Committee. For example, while there has been an overall reduction in the number of incomplete nominations submitted to the World Heritage Centre – 42 between 2012-2016, compared to 59 between 2007-2011, the fact that State Parties continue to invest considerable resources in the creation and submission of incomplete dossiers highlights the continued need for training and guidance around the creation of more robust and focused documents.

The UNITAR World Heritage Nomination Training Programme focuses on providing professionals involved in the development of nomination dossiers with a firm understanding of their requirements, as outlined in the latest version of the Operational Guidelines for the Implementation of the World Heritage Convention. As many site managers are often involved in the creation of the nomination dossier, this programme also supports the development and capacity building of those who will become responsible for the management and conservation of World Heritage properties. The programme builds upon more than 15 years’ experience training over 400 professionals from 60 countries on the unique needs of World Heritage sites and nominations.

The 2017 workshop, entitled World Heritage Nominations: Comparative Analysis, will equip participants from around the globe with a deeper understanding of not only the basics of World Heritage Nominations, but also the crucial area of Comparative Analysis, and its central role to Tentative Lists and Nominations Dossiers. The Workshop will also contribute to the development of a network of like-minded practitioners, able to communicate formally, and informally, sharing knowledge and best-practice.

Participants in the 2017 programme will receive targeted training covering key topics of the nomination and evaluation processes, including:

The workshop will be held over five days, from 27 November to 1 December 2017, in Hiroshima, Japan.

The methodological approach of the Workshop contains the following elements.

Lectures will be delivered by experts with key insight and experience and will provide both an overview of the World Heritage regime, incorporating current trends and discourse, while examining in detail the justification requirements of nominations. Experts will come from a range of organizations, including:

Underscoring the theoretical introductions and analyses presented, Study Tours form an integral part of the training methodologies used by UNITAR. Visits will be made to the World Heritage Atomic Bomb Dome and its attendant museum, as well as to the World Heritage Itsukushima Shinto Shrine.

Key to the facilitation of learning at the Workshop is a major Practical Exercise whereby participants work in small groups to analyse real world Case Studies and apply the theoretical and practical knowledge gained in the Workshop.

The target audience is 30 professionals working in the World Heritage sphere. This includes:

During the selection process, preference will be made for those who identify that they are currently involved in the preparation of tentative lists and nominations. With regard to nominations, preference will be given to nominations that are demonstrable gaps on the World Heritage List (such as sites already identified by the Committee and the Advisory Bodies as under-represented, see http://whc.unesco.org/en/globalstrategy/).

Gender balance and equality will also be taken into consideration during the selection process as well as the priorities set by the World Heritage Committee in terms of underrepresented regions (Africa, Caribbean and Small Island Developing States). A minimum of 20 participants will be required for the programme to proceed.

Participation costs for the Workshop amount to USD 1,500, payable to UNITAR through this online registration process.

Complete this online registration form first by clicking the green "Sign Up" button.

Once you have submitted this online registration, each participant is required to submit two documents – a Letter of Motivation, and a Case Study – as part of their application. Please submit these documents in Word format (.doc/.docx) to nigel.gan [at] unitar.org. These documents should be submitted following the initial registration process on this site.

A one-page letter outlining the applicant’s reasons for wanting to participate in the programme (such as current involvement in developing a World Heritage nomination) and what impact they expect participation in the programme to have on their work.

Where applicable, applicants may wish to include a letter from their relevant State Party confirming their involvement in the preparation of a nomination.

A one-page Case Study describing a heritage site with which they have experience. The case study should include:

Where applicable, applicants should also include, separately, background information on: