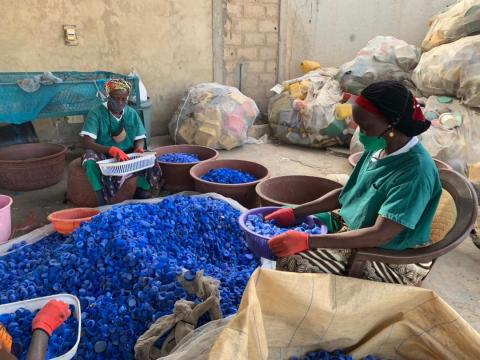 Plastic Waste and the Basel Convention

Type
Course
Location
Web-based
Duration
1 Days
Programme Area
Environment, Climate Change, Environmental Governance and Law
Website
https://unccelearn.org/
Price
$0.00
Event Focal Point Email
info@unccelearn.org
Partnership
Rotterdam and Stockholm Conventions
UNITAR
UN CC:Learn Partnership
European Union
Registration
Public – by registration
Mode of Delivery
E-learning
Language(s)
English
Pillar
Planet
Data Protection and Privacy
The personal data of participants applying for, registering for or participating in UNITAR's training courses and other events is governed by the Data Protection and Privacy Policy. By applying for, registering for or participating in this event, the participant acknowledges that he or she is, (or they are) aware of the policy and agree to its terms.
Background

In 2019, the Conference of the Parties (COP) to the Basel Convention on the Control of Transboundary Movements of Hazardous Wastes and their Disposal, at its 14th meeting, and the United Nations Environment Assembly (UNEA), at its fourth session, noted with concern that the high and rapidly increasing levels of marine litter, including plastic litter and microplastics, represent a serious environmental problem on a global scale, negatively affecting marine biodiversity, ecosystems, animal well-being, societies, livelihoods, fisheries, marine transport, recreation, tourism and economies.

The COP to the Basel Convention also emphasised that work under the Basel Convention can and will play an important role in addressing the high and rapidly increasing levels of marine plastic litter and microplastics by preventing plastic waste from entering the marine environment. In a landmark decision, the COP adopted amendments to Annexes II, VIII and IX (the Plastic Waste Amendments), making the Basel Convention the only global legally binding instrument that currently specifically addresses plastic waste.

Currently, there is no consolidated ‘one-stop-shop’ that Basel Convention Focal Points, Competent Authorities and other stakeholders can rely on to gain a comprehensive understanding of the steps needed and the tools and guidance available to ensure prevention and minimization, environmentally sound management and control of transboundary movement of plastic waste. This course aims to fill this gap.

The course explains the key provisions of the Basel Convention, thereby focusing on plastic waste across its three pillars:

After completing the course, learners will be able to:

The course is self-paced and adapted to the schedule of full-time working professionals. The three modules of the course are self-standing and can be completed in any order. For those with no or very limited background knowledge, it is recommended to complete each module in the given order. More experienced users may wish to choose specific modules individually to deepen their knowledge on a particular topic in a targeted manner.

While the course is primarily targeted at the Focal Points and Competent Authorities of the Basel Convention, it is suited for learners irrespective of their level of pre-existing knowledge of the Basel Convention and plastic waste. It may also be useful for other government stakeholders, civil society, the private sector and the general public with some waste management or environment knowledge.