VIRTUAL ROUNDTABLE SERIES. "MAINSTREAMING KNOWLEDGE ON AGEING". 2nd. Event out of 5 (1 hour, 40'): "Two worlds, same goal: Ongoing efforts at the UNGA and the UN HRC for the rights of older persons." 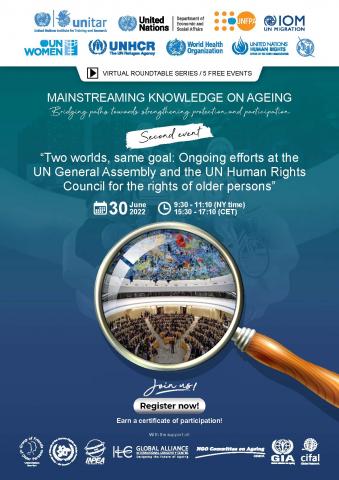 General Scenario for the whole series

Throughout the years, different stakeholders have struggled for the effective promotion and protection of the human rights of older persons. As a result, landmark steps have been taken at international level to strengthen the protection of this group.

Background of the second event

Ageing and the Human Rights Older Persons have been addressed for many decades in the international arena, mainly at the United Nations General Assembly and its Third Committee, together with the Open-Ended Working Group on Ageing in NY. Likewise, it is part of the topics covered by the United Nations Human Rights Council and its Universal Periodic Review. Many different stakeholders have been involved in this endeavor, in particular States, UN agencies, National Human Rights Institutions and Non-Governmental Organizations.

In these scenarios, some core achievements have been made, such as the the UN Principles for older persons (1991), the adoption of the Madrid International Plan of Action on Ageing (2002), the creation of the Open-Ended Working Group for the purpose of strengthening the protection of the human rights of older persons (2010), the creation of the mandate for the UN Independent Expert on the enjoyment of all human rights by older persons (2013), and the UN Decade of Healthy Ageing (2021-2030). Moreover, several Resolutions, panels, reports, and other initiatives on the rights of this group have been developed.

In this regard, this second event will be the opportunity to exchange information from NY and Geneva on the status, developments, and possibilities to complement and align further efforts.

Specific focus of the second event

To raise awareness on the dynamics in New York and Geneva, as a basis to take stock on existing and upcoming efforts towards strengthening further synergies as well as engaging different actors in the discussions.