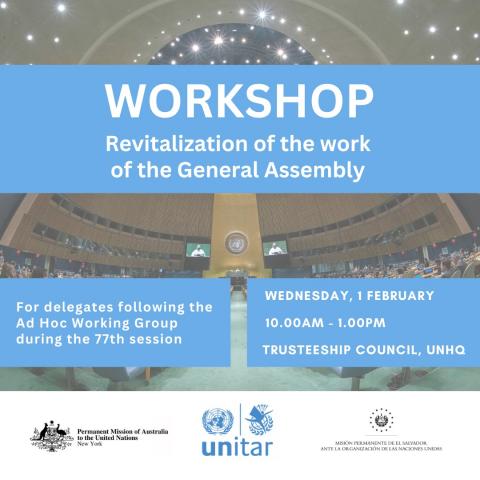 Workshop on Revitalization of the work of the General Assembly

Type
Workshop
Location
New York, United States of America
Date
1 Feb 2023
Duration
1 Days
Programme Area
Multilateral Diplomacy
Website
https://unitar.org/ny
Price
$0.00
Event Focal Point Email
patricia.romero@unitar.org
Partnership
Mission of Australia and El Salvador
Registration
By application & selection
Mode of Delivery
Face-to-Face
Language(s)
English
Pillar
Multilateral Diplomacy
Data Protection and Privacy
The personal data of participants applying for, registering for or participating in UNITAR's training courses and other events is governed by the Data Protection and Privacy Policy. By applying for, registering for or participating in this event, the participant acknowledges that he or she is, (or they are) aware of the policy and agree to its terms.
Background

The United Nations General Assembly holds a central position in the multilateral system as the chief deliberative, policymaking and most representative organ of the United Nations.

The revitalization of its work was identified as a priority from the very outset of the United Nations in 1946. A dedicated item was included in the agenda of the Assembly at its 46th session. At its 60th session and continuously since its 62nd session, the Assembly annually established an Ad Hoc Working Group (AHWG) on the revitalization of the work of the General Assembly.

With a mandate of identifying further ways to enhance the role, authority, effectiveness and efficiency of the General Assembly, the AHWG remains central in the Member States’ efforts to upgrade the United Nations, as agreed in the Declaration on the Commemoration of its 75thAnniversary (resolution 75/1).

Amidst evolving challenges, the AHWG’s deliberations and outcomes are crucial to enable the Assembly to fulfill its mandate, to successfully address emerging challenges and for the United Nations to deliver action-oriented results.

The revitalization of the work of the General Assembly is a constantly evolving, and long-term process. The main objective of the workshop is to provide delegates with essential knowledge of the background, mandate, main areas, and outcomes of the AHWG, to enable them to actively participate in the future sessions and to further strengthen the implementation of the resolutions recommended by the AHWG. The workshop will also provide an opportunity to foster dialogue with, and among, Member States, the Secretariat, global experts, and stakeholders on the future of the process to revitalize the General Assembly.

For delegates following the Ad Hoc Working Group during the 77th session.