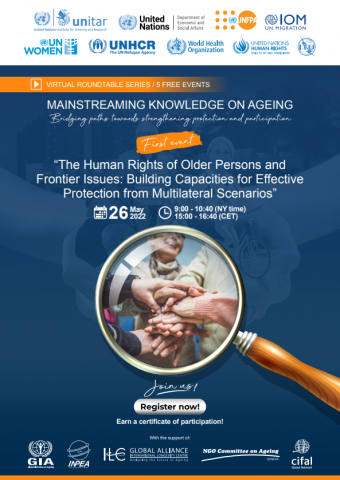 Background of the first event

Ageing is a natural process. If we are lucky enough, sooner or later we may all experience elderly by firsthand, or because one of our relatives, friends or colleagues are already or getting closer to this stage of life.

Face this reality, the promotion and protection of the rights of older persons involve individuals and societies as a whole. This endeavour should be addressed in a comprehensive manner at local, national, regional, and international levels.

The interlinkages between ageing and frontier issues, understood as those matters that are not usually associated to a certain topic but indeed are significantly correlated, should also be understood to move forward from theory to practice.

In this regard, in this first event, on Thursday, at 09:00 NY/ 15:00 CET, on the 26th of May, 2022, some UN entities will be sharing some information from their respective fields on existing initiatives and standards on the demographic worldwide scenario, gender data, human mobility, digital divide, and climate change as frontier issues to the rights of older persons. This space is envisaged as an opportunity to learn from ongoing efforts coming from multilateral scenarios, as well as the feasibility of its development.

Specific focus of the first event

To learn from developments on the protection of older persons in frontier issues to human rights.

Note: Just those participants who have succeeded the first criteria will receive information to access to the quiz. Once that participants have approved it, then they will be receiving access to print their own certificates.